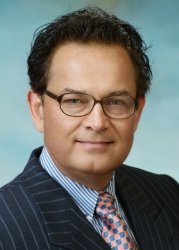 Dr. Arden Andersen, DO, MSPH, PhD has been warmly welcomed as “Best in Medicine” by the American Health Council for his dedication to healthcare during 21 years as an osteopath, physician and expert in nutrition Dr. Andersen is currently a staff physician at McDonagh Medical Center.

Dr. Andersen began his professional life as a consultant in the field of Agricultural Nutrition, working to improve soil and crops through the understanding that weeds, diseases and insect pests were directly correlated to nutritional deficiencies and imbalances in the soils and crops. He was motivated by the desire to help people and make a difference, and after ten years in agriculture he decided he could help even more people by practicing medicine. In the course of his agricultural work, Dr. Andersen has met many farmers suffering from various disorders from infertility to cancer as a result of pesticide exposure and poor diets. This experience inspired him to take a holistic approach to medicine that included nutritional medicine and making the connection between the farm and how food is grown and consumer health. His books include Science In Agriculture, The Anatomy of Life and Energy In Agriculture, Real Medicine Real Health and Food Plague.

Having earned his medical degree from Western University of Health Sciences, College of Osteopathic Medicine of the Pacific, Dr. Andersen undertook an internship in family practice at Mercy-General Health Partners, Muskegon, MI., and a residency in occupational medicine at the University of South Florida. Dr. Andersen has his own private medical practice, Andersen Medical Group, LLC in the greater Kansas City, Kansas area. He specializes in Occupational and Family Medicine, and his responsibilities include treating patients using Nutritional Therapies, Bio-Identical Hormones, Nutritional IV’s, Prolotherapy including PRP, Osteopathic Manipulative Medicine as well as standard family and occupational medicine.

Beyond his role at McDonagh Medical Center, Dr. Andersen maintains reserve status as a Flight Surgeon and Colonel in the U.S. Air Force, and has earned the Warrior’s Creed Award. He advocates for better nutritional science and medicine through his blog and has published books on medicine and food production. In 2013 he was awarded the Acres USA Lifetime Achievement Award. He attributes his success to his persistence and his desire to make a difference. In his free time, Dr. Andersen enjoys traveling and ballroom dancing.