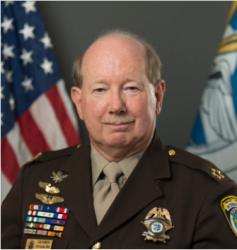 The American Health Council has welcomed Chief Gene Saunders as ” Best in Healthcare” in recognition of his outstanding dedication to the non-profit sector in founding the non-profit organization Project Lifesaver.

Project Lifesaver is a 501 (C)(3) community based, public safety, non-profit organization that provides law enforcement, fire/rescue, and caregivers with a program designed to protect, and when necessary, quickly locate individuals with cognitive disorders who are prone to the life threatening behavior of wandering. The organization was founded in 1999 in Chesapeake, Virginia. The necessity of this program was determined through the correlation between cognitive conditions and the act of wandering.  With the dramatic increase of cognitive conditions since the inception of the organization, the program has grown from a localized program to a program recognized internationally as a proven and effective method of “bringing loved ones home.”

Project Lifesaver was the first to apply such locating techniques to aid in the search and rescue of individuals, and is the most widely used and proven most effective program in the nation that is specifically designed to protect the “At Risk” populations in our communities. The program was structured in a way that strategically combined state of the art locating technologies, innovative search and rescue methods, and community policing courses that educated first responders about cognitive conditions. The search times for certified Project Lifesaver agencies have been reduced from hours, potentially days, down to minutes.  Recovery times for Project Lifesaver agencies average 30 minutes, which is 95% less time than standard operations without Project Lifesaver.

After serving in the military reserves, Mr. Saunders got a taste for police work when his reserves unit was redesignated as a military police unit. In 1968, he decided to take a job in the Chesapeake Police Department and throughout his career spanning three decades, Mr. Saunders held every command in the police department, retiring in 2001 as a Captain. He was also Command of the SWAT team for 23 years and Chief of Search and Rescue for the Chesapeake Virginia Sheriff’s Office.

In 1999 – two years prior to his retirement in the police force – Mr. Saunders founded his non-profit organization, Project Lifesaver International, after noticing the link between cognitive conditions, like Alzheimer’s and Autism, and the life-threatening act of wandering. The company provides law enforcement officers, fire and rescue, and caregivers with a program which is designed to protect, locate, and rescue individuals who are deemed at risk.

Now in all 50 States in America, the District of Columbia and six provinces in Canada, Project Lifesaver has over 1,526 agencies, has an incredible 100 percent success rate and has completed thousands of rescues.

Mr. Saunders’ illustrious career has not gone unnoticed. He has received numerous accolades and rewards, as well as being recognized internationally for his expertise. He has been awarded three Commendation Medals, three Line of Duty Injury Medals and three Silver Stars for Valor given by the American Police Hall of Fame. For his SWAT service, Mr. Saunders earned a Presidential Commendation, presented to him by President Bill Clinton. He’s also been awarded the Congressional Medal of Honor Foundation’s ‘Service Before Self’ Citizens Honor Award, was given the People of Distinction Award by CBS Radio and in 2019, his company Project Lifesaver International was also awarded Non-Profit of the Year.

Further notable mentions include being named as Person of Distinction by Al Cole Radio Show and he was given the Moving America Forward Award by the William Shatner TV Show. Additionally, Mr. Saunders has also received hero awards from the Bank of America and Pilot International-Virginia District.

Most recently, Mr. Saunders has been inducted into the prestigious Marquis Who’s Who Biographical Registry and was also selected as Top CEO of the Year by the International Association of Top Professionals for his dedication, outstanding leadership, and commitment.

Mr. Saunders has a wealth of skills and expertise under his belt. He is a Certified Instructor in Pursuit Driving, Special Operations, General Law Enforcement, Search and Rescue, Firearms and Raid Planning. He’s spent many years skydiving and whilst volunteering with the Virginia Beach Police Department, he functioned as a Helicopter Flight Officer. Aside from this, Mr. Saunders is author of several articles about wandering and has appeared on many TV and radio stations both nationally and internationally.

As his career continues, Chief Saunders is actively involved in 11 different prestigious organizations and his five-year goal is to make Project Lifesaver free to everyone. Mr. Saunders credits his success to the motivation and inspiration from Sheriff John Newhart from the Chesapeake office, as well as his own patience, perseverance, education, and resourcefulness, especially at times when others doubted his ability.