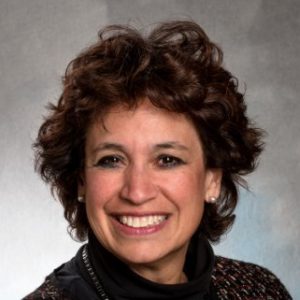 Board Certified in Radiology by the American Board of Radiology, Dr. Georgian-Smith’s day-to-day responsibilities as a Radiologist at Brigham and Women’s Hospital include clinical work, teaching residents and fellows, and conducting research in the field of Breast Imaging.

Following graduation with her medical degree from Case Western Reserve University School of Medicine in 1983, Dr. Georgian-Smith completed a residency at Cleveland Clinic Foundation in 1988. In 1989, she pursued a fellowship in Diagnostic Radiology at the University of Cincinnati Medical Center and holds a Diagnostic Radiology Certification.  Additionally, Dr. Georgian-Smith is an Accreditation Reviewer for ACR in Mammography and Breast Ultrasound.

Looking back, Dr. Georgian-Smith attributes her success to the late Dr. William E. Shiels, DO, pediatric radiologist, who “created” the turkey breast model. Together, they formed a team to teach freehand invasive sonography to hundreds of radiologists, upon which Dr. Georgian-Smith started her academic career almost thirty years ago (https://www.rsna.org/News.aspx?id=17928). Initially fascinated by the field of Veterinary Medicine, Dr. Georgian-Smith chose Medicine due to the desire to study breast imaging and radiology.

Due to her commitment to the excellence in the field of Medicine, Dr. Georgian-Smith has been the recipient of the following honors: Radiological Society of North America (RSNA) Scientific Exhibit Awards (1991, 1992, 2009) and Education Exhibit (2011& 2012), American Roentgen Ray Society (ARRS) – 1994-1995, 2004; The International Health and Medical Film Festival Finalist in 1994 and Best in Category FREDDIE Award in 1995.

Beyond her research accomplishments, Dr. Georgian-Smith is recognized for her role in the Turkey Breast Model, which is a simulation model that shaped her career. She co-authored the book with pathologist Dr. Thomas Lawton, Breast Imaging and Pathologic Correlation: A Pattern-Based Approach (Lippincott, Philadelphia, PA, 2014), a book designed to bridge the ACR BIRADS ® lexicon with histopathology.

In her free time, Dr. Georgian-Smith enjoys traveling and Dressage, an equestrian discipline. She volunteers with The American Cancer Society, Mass Prevention of Cruelty to Animals, and WGBH.

Considering the future, Dr. Georgian-Smith hopes to continue research and growth in the field of Radiology.

Radiologist at Brigham and Women’s Hospital