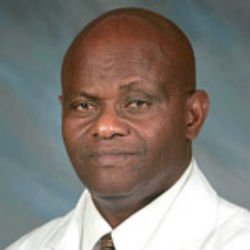 The American Health Council has welcomed Dr. Isaac Delke, MD, FACOG as “Best in Medicine” in recognition for his outstanding contributions to the healthcare industry. He is best known for his role as Professor of the Department of Obstetrics & Gynecology at the University of Florida College of Medicine, which he has fulfilled for the past 27 years.

Dr. Delke grew up in Ethiopia in a family of farmers. His parents sent him to school where he first had an insight into the medical profession from missionaries who coached and mentored him when they came to his village. It was his grandmother, the missionaries influence and their joint encouragement that guided him to finish school and study medicine.

Dr. Delke attributes his success to his grandmother and parents who encouraged him to go missionary school, which meant him leaving home to get an education. After finishing high school he registered for college entry with civil engineering as a major, but Father & Son missionary physicians invited him to visit their hospital. It was at this point they advised him to consider medicine as a career rather than engineering.

Dr. Delke focused his academic endeavours on medicine, studying at the Haile Selassie I University, Addis Ababa, Ethiopia where he attained his MD in 1971. Following on from this achievement, Dr. Delke had the opportunity to complete his Residency in OBGYN at the Brookdale Hospital Medical Center, before going on to complete his Fellowship at SUNY Health Science Center in maternal-fetal medicine.

Dr. Delke has successfully upheld the role of Professor in the Department of Obstetrics & Gynecology at the University of Florida College of Medicine in Jacksonville and University of Florida Health Jacksonville for the past 27 years. With a continued focus on patient safety and quality improvement, his daily responsibilities include working in patient care specializing in Obstetrics and Gynecology and maternal-fetal medicine.
His contribution to medical education includes, resident education (outpatient, inpatient, and operating room), and medical student education during their 6-week third-year clerkship rotation. Additionally, Dr. Delke carries out clinical duties which revolve around maternal morbidity and mortality, and pregnancies complicated by HIV infection. He also participates in International Maternal Pediatric Adolescent AIDS Clinical Trials Group (IMPAACT) studies, sponsored by the National Institute of Health (NIH), 1994-Present.

In light of his many professional accomplishments, Dr. Delke is proud to have become a Fellow of the American College of Obstetricians and Gynecologists and also a Public Health Service Panel Member, Bethesda, Maryland. He has had the privilege to participate in many medical projects including Review of the Results of AIDS Clinical Trial Group (ACTG) 076 (1994), Member, Office of AIDS Research Advisory Council (OARAC), NIH, Bethesda, Maryland (2004-2007), Member, International AIDS Society from 2001 – present and the Florida Pregnancy-Associated Mortality Review (PAMR) Committee, Tallahassee, Florida from 2000 – present. Since 1994, Dr. Delke has participated as a Principal Investigator (P.I) and Co-P.I in NIH-funded HIV in pregnancy clinical trials.

In recognition of his accolades in the medical field, Dr. Delke has had the honor of being awarded by Castle Connolly Top Doctors and was the recipient of Exemplary Teacher from University of Florida for numerous years. Dr. Delke has also received the National Faculty Award, Council on Resident Education in Obstetrics and Gynecology for 1995 and 2000, and the Society of Perinatal Obstetricians (SPO) for Best Research Idea Award in 1985. It all started when Dr. Delke was awarded the Emperor Haile Selassie I Scholarship for two-year pre-medical and 4-year Medical School education.

Continually striving to remain ahead in the medical industry, Dr. Delke is a member of numerous professional organizations. These include the Duval County Medical Society,
American College of Obstetricians and Gynecologists, Society of Maternal Fetal Medicine and HIV Local and International AIDS Society.

In the future, Dr. Delke wishes to continue advocating for HIV prevention and treatment on an international scale and has the aspiration to serve his people in Ethiopia.

Dr. Delke is extremely proud of his family and what he has achieved. In his free time, Dr. Delke enjoys spending time with his wife and their family in New York City and also traveling to the Dominican Republic and Ethiopia. In his spare time he enjoys walking outside and regularly donates to the American Red Cross.

Professor of the Department of Obstetrics & Gynecology in the Division of Maternal and Fetal Medicine at UF college of Medicine – Jacksonville.