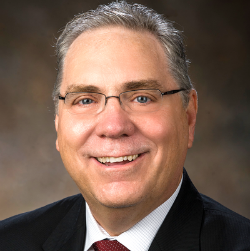 The American Health Council warmly welcomes John Duby, MD, FAAP, CPE as “Best in Medicine.” Currently a Professor and Chair of the Department of Pediatrics at the Wright State University Boonshoft School of Medicine and Vice President for Academic Affairs and Community Health at the Dayton Children’s Hospital in Dayton, Ohio, Dr. John Duby conducts research on the interface between developmental-behavioral pediatrics and primary care, with an emphasis on the use of quality improvement science to enhance care. While he has held his current role for over two years, Dr. Duby has spent nearly 40 years in the healthcare industry expanding his skills and expertise in developmental-behavioral pediatrics, medicine and patient care.

The American Academy of Pediatrics honored Dr. Duby with an Achievement Award for Reach Out and Read Ohio in 2002 and the Ohio Chapter honored him with the Elizabeth Spencer Ruppert Outstanding Pediatrician of the Year award in 2009. In 2007, he was named on the Best Doctors in America list and remained there for nine consecutive years. In 2010, he earned the Arnold P. Gold Foundation Award for Humanism in Medicine from the American Academy of Pediatrics. His extensive experience and knowledge landed him a spot on the Ohio State University Alumni Association’s 100 Buckeyes You Should Know in 2011, Castle Conolly’s America’s Top Doctors in Developmental-Behavioral Pediatrics for four consecutive years in 2014 and in the Top 10 Percent on America’s Most Honored Professionals list in 2016.

Dr. Duby currently serves on the Emeritus Boards for Voices for Ohio’s Children and the Ohio American Academy of Pediatrics Foundation. In his free time, he enjoys reading, hiking, golfing and following the Ohio State Buckeyes. With a prosperous career at hand, Dr. Duby plans to eventually finish his career in his current role, but until then, he plans to continue to lead and promote programs at Dayton Children’s Hospital.