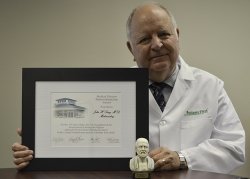 The American Health Council has cordially appointed Dr. John H. Surry as “Best in Medicine”, in recognition of his achievements in the fields of Family Medicine and Education. As a highly regarded and respected Medical Doctor, Dr. Surry, of Pennsylvania, has amassed almost four and half decades of service over the course of his long and successful career.

Dr. Surry initially thought that he would become a priest and later, an engineer. Several experiences convinced him by his third year in High School that a career in Medicine was a perfect match for his talents and interests. His activities in Boy Scouts including the First Aid and Public Health merit badges, as well as the results of an aptitude test administered that year showing his strengths in science and social service, launched his desire to become a physician. During his final year of High School, the wonderful care he received from his Family Physician cemented his decision to become a Family Physician.

Dr. Surry’s academic studies began with his pre-med at John Carroll University, followed by his MD from St. Louis University School of Medicine, a Residency in Family Medicine at Lancaster General Hospital and a Faculty Development Post-Graduate Program at Duke University. During the second year of his residency training Dr. Surry, who was also a recipient of an Ohio State Medical Association Scholarship, developed an intense interest in teaching other physicians, a path which was to form prominently in his future career.

On a day to day basis Dr. Surry serves as the curriculum lead for PAFP, drawing from a diverse set of experiences and interests derived from private practice, medical education of students and residents, and corporate practice in Correctional Health, Occupational Health and Urgent Care.

Dr. Surry’s success derives from an ongoing curiosity and love of medical practice and how to help his fellow physicians learn effectively in a positive learning environment while maintaining competency in the challenging speciality of Family Medicine. He loved serving his patient populations and teaching students and residents and now is focused on the education of Family Physicians.

Within the next five years, Dr. Surry plans to travel extensively while continuing his medical and personal reading and studies. He plans to focus on writing both medical articles and lectures, and personal books regarding Fatherhood. Through his continued affiliation with the PAFP, he hopes to expand the reach and impact of medical education programs.