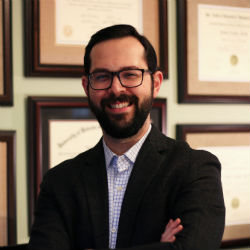 The American Health Council appointed Justin Capote, MD to its Board of Physicians for his outstanding contributions to improving mental health. Dr. Capote specializes in adult psychiatry and is experienced in treating issues related to medication overuse, substance abuse, withdrawal syndromes, age-related comorbidities, and common psychiatric issues such as anxiety, anger, and depression. While he has only recently opened the doors to his own practice in New Jersey, JGC Psychiatric Consultations, Dr. Capote has been practicing medicine for the last 9 years and has worked as a psychiatric consultation-liaison in hospital settings for the last 5 years.

Fascinated by the sciences in high school, Dr. Capote’s curiosity in medicine, and psychology, in particular, developed after his mother shared with him a book titled “Emotional Intelligence.” It inspired him to take some coursework in psychology and abnormal psychology in addition to his pre-med coursework in college. He went on to earn his bachelor’s degree in psychology and biology from Rutgers University in New Brunswick, N.J. In 2009, he received his medical degree from the University of Medicine and Dentistry of New Jersey and then began his residency training in the Mount Sinai Hospital system in New York City later that same year. He was elected chief resident and earned the Resident Teacher of the Year Award in his final year of training. After completing his residency in 2013, he pursued a year-long fellowship in consultation-liaison psychiatry.

Board-certified in both adult psychiatry and consultation-liaison psychiatry, Dr. Capote’s career blossomed during his time in the Atlantic Health System. There he provided collaborative psychiatric care on medical, surgical, oncological, and intensive care units. During that time, he earned a second teaching award for his work with house staff and gained notoriety for his work with medical students. He has since moved on to an outpatient position with a Telepsychiatry company, InnovaTel, which strives to improve access to high-quality psychiatric care in high volume and underserved clinic systems around the country. Dr. Capote has developed a precise approach to medication simplification and discontinuation in addition to his interpretation and management of the myriad causes of emotional distress in day-to-day life.

Dr. Capote is a member of the Academy of Psychosomatic Medicine as well as The New Jersey Medical School Alumni Association. He also contributes to National Public Radio, New Jersey Working Families, and the ACLU. In his free time, he enjoys cooking, playing the guitar, and billiards. His enjoyment and skill in the latter earned him 3 local division championships in the American Poolplayers Association.

With a successful career at hand, Dr. Capote remains abreast of evidence-based practice in order to continue to deliver high-quality mental health care to his patients. He hopes to make a positive impact on his community by being a reliable source of information and empowerment for years to come.