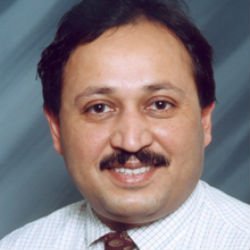 Dr. Majaz Moonis, Professor of Neurology and Director of Stroke Services at UMass Memorial Medical Center has been selected to join the Physician Board at the American Health Council. He will be sharing his knowledge and expertise on Neurology, Psychiatry, Sleep Medicine, Cerebrovascular Disease, and Epilepsy.

Dr. Moonis’ desire to pursue the field of Neurology developed after his initial interest in Neuro-anatomy. Looking back, he attributes his success to his research on statins, stroke and dementia and organizational skill developing the stroke center and sleep centers. He is most proud of his articles on statins, stroke outcomes, effect of high dose statins in familial Alzheimer’s disease and effect of stroke prevention by neurologists to reduce the burden of recurrent stroke. His paper Statins Improve Stroke outcomes was one of the first and was presented in national and international press in 2005. It was also televised on many TV channels and Live on the French news channel. One of his earlier papers on Foreign Accent Syndrome received the same wide nation publicity including a Newsweek Quote and was on the golden collection of car talk.

Due to his strides in stroke research, Dr. Moonis has been invited by many organizations to speak at national and international meetings.

In his free time, he enjoys boating, golfing, and reading. Dr. Moonis is fluent in Hindi and Urdu.

Considering the future, Dr. Moonis hopes for continual career growth, educating others and researching to expand the statin effects of Dementia and Multiple Sclerosis.