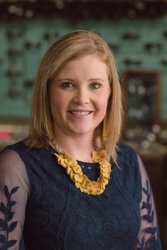 The American Health Council has proudly welcomed Dr. Sarah Johle as “Best in Medicine.” Specializing in Optometry and Glaucoma, Dr. Sarah Johle is the proud owner of a successful Optometrist Practice and has practiced for 11 years to build it to the notable community standing it has today.

It was Dr. Johle’s strong love for her family that first influenced her choice of career path. After her brother was diagnosed with Type 1 Diabetes, she became interested in the field of optometry; a change from her previous interest of nutritional sciences. Knowing that she might be able to help others with the disease who may be suffering from related vision issues inspired her to pursue her chosen career.

Dr. Johle’s first academic achievement was a Bachelors of Science degree received in 2004 from Texas A&M University with distinction. She then went on to complete a Doctor of Optometry degree from the University of Houston College of Optometry in 2008.  Following this, Dr. Johle was honoured to become an Officer in the American Osteopathic Student Association and a Member of the Fellowship of Christian Optometrists.

During her final year of optometry study, Dr. Johle learnt in great extent contact fitting and the art of LASIK surgery management, along with glaucoma, which later became her speciality.

Currently Dr. Johle is the Lead Optometrist at her own optometry practice, Hutto Family Eye Care, which is the most popular and a well respected optometry centre in the Hutto area. This role allows the esteemed professional to utilize her extensive glaucoma expertize to help her customers. Knowing how important the eyes are in diagnosing other illnesses, Dr. Johle takes pride in providing that extra little bit of care. On a daily basis, Dr. Johle’s responsibilities within her business include general optometry duties associated with eye testing, diagnosing cataracts, eye infections and diabetic eye diseases. This is in addition to the general management and administrative duties that come with being the owner of the practice.

Dr. Johle has grown the team at the practice, including taking on two associate optometrists. This expansion has allowed Hutto Family Eye Care to take on even more patients and further increasing the number of people they are able to assist through their impeccable eye care services. Similarly, in furthering Hutto’s community reach, Dr.Johle hopes to continue building on the work of the Hutto Education Foundation, created to help fund the futures of children in Hutto. This is a cause that is particularly close to Dr.Johle’s heart as she is a mother herself.

Outside of work Dr. Johle is a family woman who enjoys spending time with her two boys and family, as well as being an avid Texas A&M University football fan. Dr. Johle prides herself on her ability to balance work and family life.