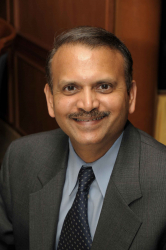 The American Health Council has cordially appointed Dr. Sripad H. Dhawlikar, M.D., as “Best in Medicine.” having amassed  over 28 years of experience in the Orthopedic industry, including vast experience in Spinal and Scoliosis Surgery, Minimally Invasive Spine Surgery, Pain Management and Pediatric Orthopedics.

Following his enrollment at the Medical School at Gandhi Medical College in India, Dr. Dhawlikar completed both his Internship and Residency at the State University of New York-Buffalo. Subsequently, he went to the Hospital for Special Surgery at Cornell University, where he finished his Fellowship. In addition, Dr. Dhawlikar obtained Board Certification by the American Board of Orthopedic Surgery during his education.

Currently, Dr. Dhawlikar works with Ocean Orthopedic Associates, who are leaders in the healthcare industry thanks to their devotion to their clients. The practice prides itself on offering quality healthcare using the latest medical technology and places the client experience at the heart of all their services.

As well as being recognized by International Who’s Who, Dr. Dhawlikar has received several other outstanding awards including a nomination of ‘Top Surgeon’ from Money Magazine.