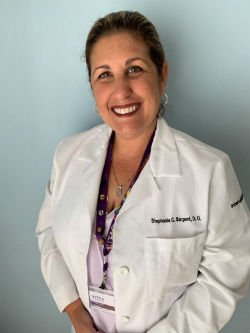 Stephanie Sargent, DO, FACOI, HMDC is recognized by the American Health Council as “Best in Medicine” for her outstanding contributions to the medical field. Currently the Associate Medical Director at VITAS Healthcare in Mount Laurel, N.J., Dr. Sargent educates case managers and facility nurses through patient care and presentations. While she has held her current role for over two years, Dr. Sargent has spent 17 years in the healthcare industry expanding her skills and knowledge in Medicine and Internal Medicine.

Holding a passion and interest in anatomy and human biology, Dr. Sargent first earned a BS in Biology at the College of William and Mary in 1998. She later earned a Doctor of Osteopathic Medicine degree from the Philadelphia College of Osteopathic Medicine in 2002. She earned her Board Certification in Internal Medicine from the American Board of Internal Medicine in 2015, and recertified successfully in 2015. To diversify her skills, Dr. Sargent later became Hospice Medical Director Certified.

Dr. Sargent established her career at the Kennedy Health System in 2003 as she served as a hospitalist at the institution for seven years. She later spent four years harvesting and strengthening skills in national utilization review, helping physicians with documentation. By 2015, she accepted a per-diem physician role at the VITAS Inpatient Hospice Unit and was later appointed as Associate Medical Director. She is currently serving as Interim Medical Director.

In her free time, Dr. Sargent enjoys spending time with her family, supporting her children’s sporting events, relaxing, reading, and swimming. With a successful career at hand, she attributes her achievements to her ability to grow in a changing healthcare environment, demonstrating flexibility and strength. She plans to maintain her success by continuing to educate those in the medical field, as well as the public, about hospice and the importance of end-of-life care.

Osama Elsawy, DO
Scroll to top