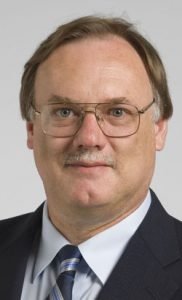 Dr. Wolf H. Stapelfeldt, Professor and Department Chairman at St. Louis University, has been recognized as a “Leader in Medicine” among “America’s Best Doctors” for 2017. Dr. Stapelfeldt was selected based on his knowledge and expertise in Anesthesiology and Organ Transplantation.

In his current capacity as Tenured Professor and Department Chairman at St. Louis University since 2014, his day-to-day responsibilities include the oversight of the Anesthesia Department, researching and improving outcomes while providing anesthesia services with an emphasis on minimizing harmful intraoperative hypotensive exposures. Dr. Stapelfeldt has authored over eighty-five academic research contributions with his research focused on liver transplantation and on creating predictive models, as well as developing electronic systems to allow physicians make better and more informed clinical decisions in real time at the various points of perioperative patient care.

He serves as one of the Founders and as the original Chief Medical Officer of Talis Clinical, LLC, a Cleveland Clinic spinoff information management company. Talis Clinical has created software that distills and analyzes patient information in real time to guide physicians in the high stress high acuity care environments of the ORs, PACUs and ICUs.

As a testament to his success, Dr. Stapelfeldt’s contributions over the course of his career have been recognized with a ‘Top Ten in Medicine’ Innovations Award at the Cleveland Clinic, a U.S. Department of Veterans Affairs Merit Review award, a Young Investigator Award from the Foundation for Anesthesia Education and Research (FAER) and Roche Laboratories as well as Resident of the Year and Edward C. Kendall Awards from the Mayo Clinic.

Garnering over three decades of medical expertise, Dr. Stapelfeldt owns several patents and trademarks related to Clinical Decision Support technologies  and is the creator of the SLUScore™ perioperative risk scoring concept. Additionally, he has provided seminal assistance in the establishment of liver transplant anesthesia programs at the Mayo Clinics in Jacksonville, Florida, and in Phoenix/ Scottsdale, Arizona, as well as at the Children’s’ Hospital in San José, Costa Rica.

Looking back, Dr. Stapelfeldt attributes his success to being a part of great healthcare organizations and working in wonderful departments. His desire to pursue a career in Anesthesiology developed from his love for real time Physiology and Pharmacology.

As a certified single-engine pilot, Dr. Stapelfeldt enjoys flying sports planes in his free time. Other activities include his active engagement in animal rescue.

Considering the future, Dr. Stapelfeldt hopes and strives for the widespread realization of a substantial reduction in the significant postoperative morbidity and mortality that commonly ensues in the days, weeks and months following surgery and anesthesia.